The basics of RealOpInsight is to help to monitor how your business applications are operating at any single point of time. RealOpInsight aims to provide to IT managers and operations staffs, tools to easily analyse the impact of any single issue and also to help on investigating root cause problems. 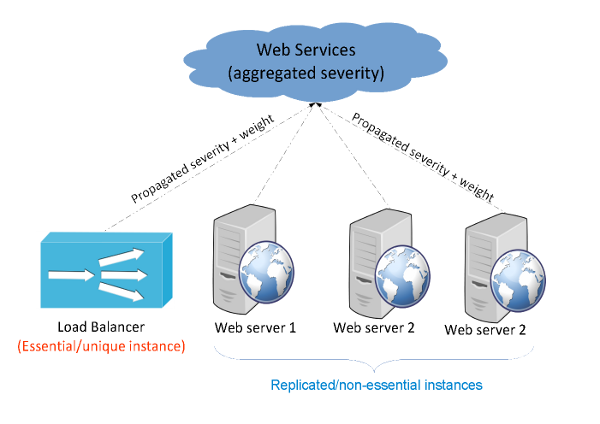 Each service propagates to its parent a severity and a weight associated to the severity. The overall status of the parent service is computed using a calculation algorithm that aggregates the severities and the weights propagated of subservices.

As such a business service can be represented as a dependency graph comprised of the following king of components (see an illustration hereafter):

RealOpInsight leverages the capabilities of traditionnal monitoring systems in a unified, and integrated framework so as to make operations management more effective in modern cloud-native environments. RealOpInsight is designed to make its integration easy in distributed and large monitoring environments. It works on top of Kubernetes, Nagios, Zenoss, Zabbix, Pandora FMS, Icinga, Shinken, Centreon, GroundWork, op5, and various other monitoring systems.

One of key visualization concepts that RealOpInsight introduces is Application Dashboard, as illustrated on the figure below. It provides to administrators and operations staffs a comprehensive view of an application platform through: a Service Tree and a Service Map that represent services along with their dependencies; a Message Panel where status messages related low level services are displayed. In short, an Application Dashboard provides a flexible tool that simplifies incident impact analysis. 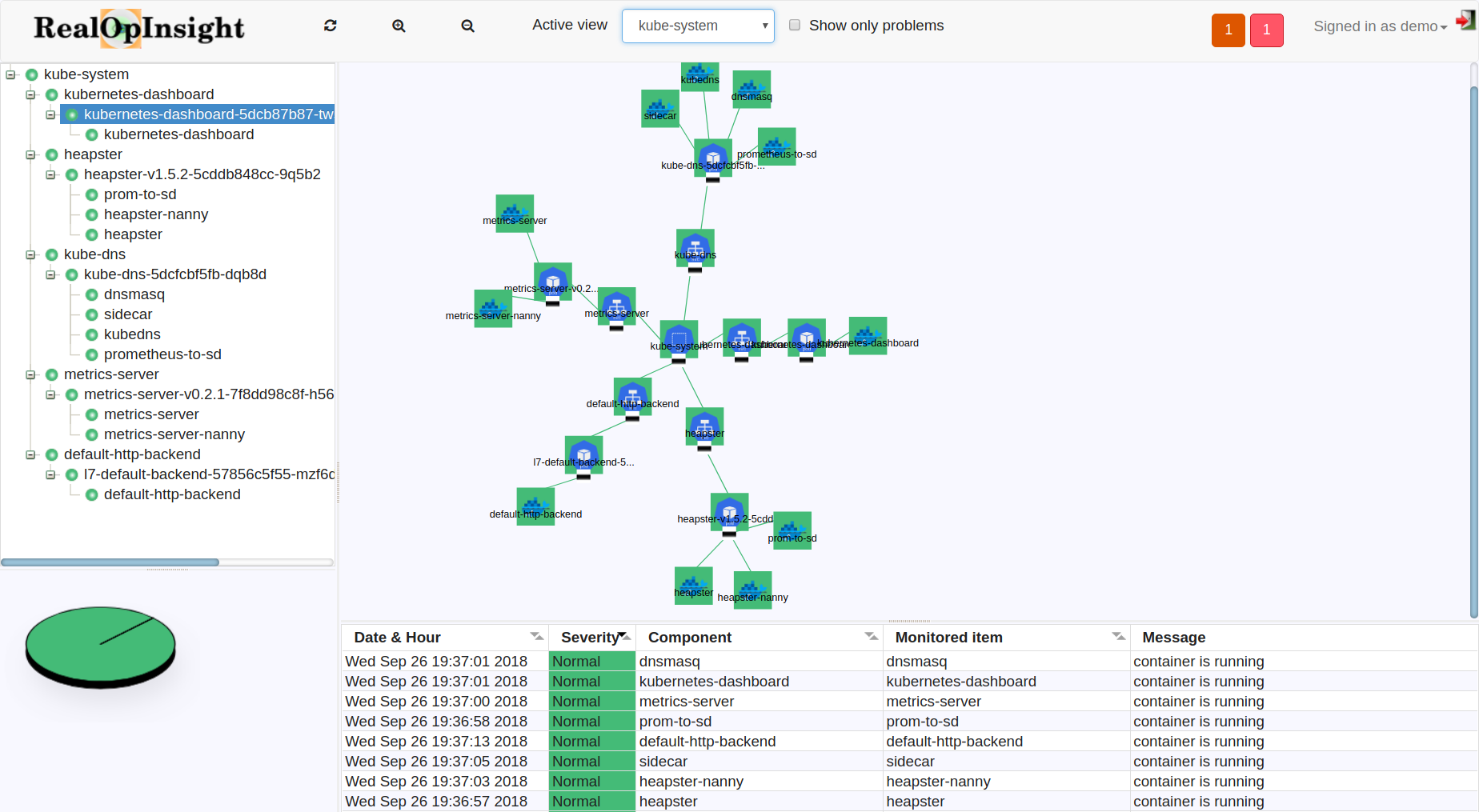 This is another key visualization concept introcued by RealOpInsight. An Executive Dashboard, as you can see an example on the figure below, provides to IT managers and operations staffs a comprehensive status view on a set of business applications. In the Executive Dashboard, each business application is represented by a tile, e.g. Hadoop on the figure, along with a label, a status color, and a summary of problems on the underlying components. The tile is an interactive widget with notably tooltip and a click action allowing to open the associated Application Dashboard.

Each operator has an Executive Dashboard that acts as his home page on login. It can consist of no, one, or many business application items organized within a grid with configurable number of columns. As administrator you need to create operators and explicitly assign business applications to them. 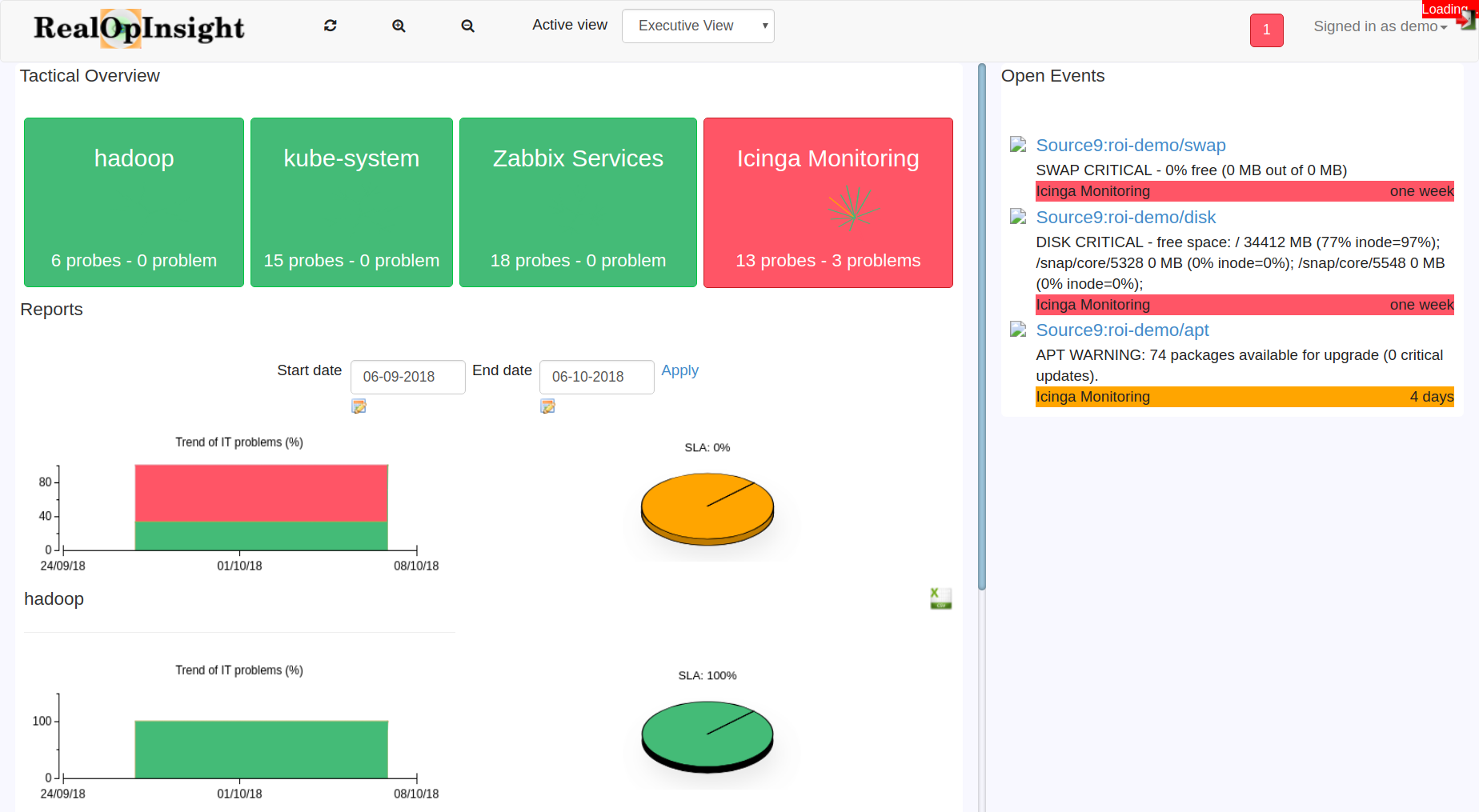 According to the dependency map a service may depend on several subservices. Each subservice in turn may also depend on other subservices, the severity status of a service is determined by aggregating the statuses of its direct lower services. This is done on the basis of specific rules that RealOpInsight provides to aggregate and propagate severity from the lower to the upper services (severity, weight, status propagation rule, status calculation rule).

Weighting enables you to associate a weight factor with a service. The weight factor can be any real number between min=0 and max=10, determining how important the service is to its parent service compared to other sibling services.

In practice, weighting is used in conjunction with severity calculation rules <calcrules> and severity propagation rules <proprules> when computing the overall status of a service according to the individual statuses of its subservices.

A calculation rule defines how the severity of a service shall be computed according to the weights and the severities propagated by its direct subservices. RealOpInsight supports the following rules:

The status of the service is determined by the highest (most critical) severity propagated by its direct subservices.

Generally stated, the weighted average of severities propagated by n subservices s1, s2…sn with respectively the weights w1, w2…wn can be determined as following:

The overall severity of a service can be determined as follows:

Concretely, in order to enable the evaluation of these expressions each severity is associated by convention to a positive integer:

This rule improves the simple weighted average rule described above. In addition, it provides the ability to escalate a severity when given thresholds of similar events are reached. For example, you may want to escalate the severity from Major to Critical if more than 50% of services are in Major state.

Given that a service can have more than one threshold rules defined, the rules are evaluated beginning by the rule having the highest resulting severity value. For example, if we have the following threshold rules: (R1) 50% Minor => Major, and (R2) 100% Minor => Critical. The rule R2 will be evaluated before the rule R1 since Critical is assumed to be higher than Major. If the evaluation of (R2), i.e. if there are less than 100% Minor events, then (R1) will be evaluated.

A propagation rule defines how the status of a service shall be propagated to its parent service. RealOpInsight supports the following rules:

The severity of the service is decreased before being propagated to its parent service.

The severity of the service is increased before being propagated to its parent service.

The severity of the service is propagated as is to its parent service.

In the service dependency hierarchy, the status of a given service is computed by aggregating the propagated severities of its subservices through the severity calculation rule defined for that service.

RealOpInsight handles notification at business service level, and not at basic incident level like traditionnal monitoring systems. Additional its contextual messages allow you to set specific messages to show on the operations console when a event occurs or is resolved. Indeed, it’s usual that when events occur, your monitoring systems raise generic messages, without any contextual information (e.g. hostname), and often in languages that your operations staffs are not familiar with. To help your operations staffs in such situations, RealOpInsight lets you set the messages to show to operations console when events occur or are resolved. This aims to have better comprehensible and more useful messages.

For example, assume that for monitoring the root partition of a database server, we have the following definition in our Nagios configuration:

If the free space on that partition becomes less than 30% (warning threshold), then Nagios shall report an alert indicating something like DISK WARNING - free space: / 58483 MB (28% inode=67%).